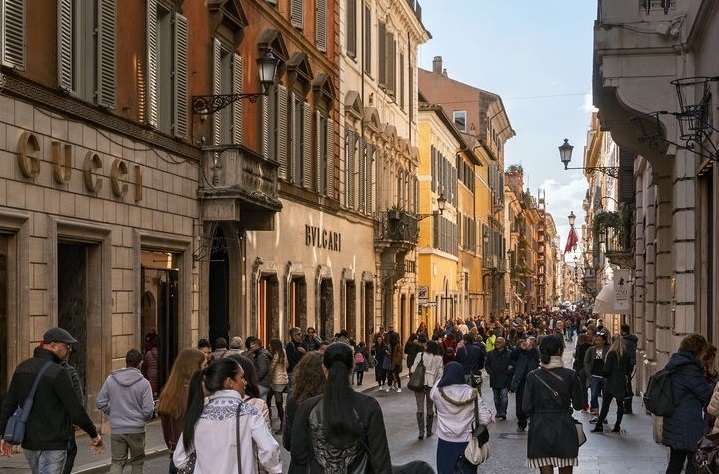 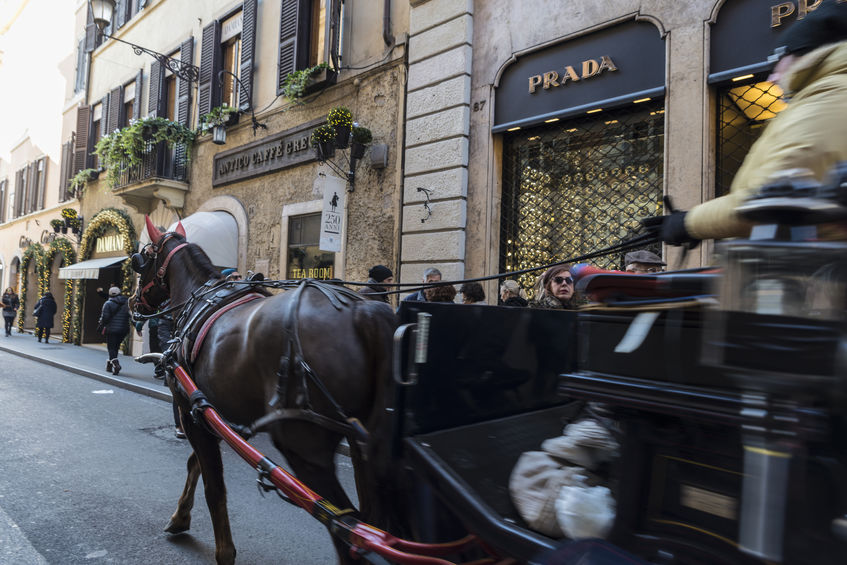 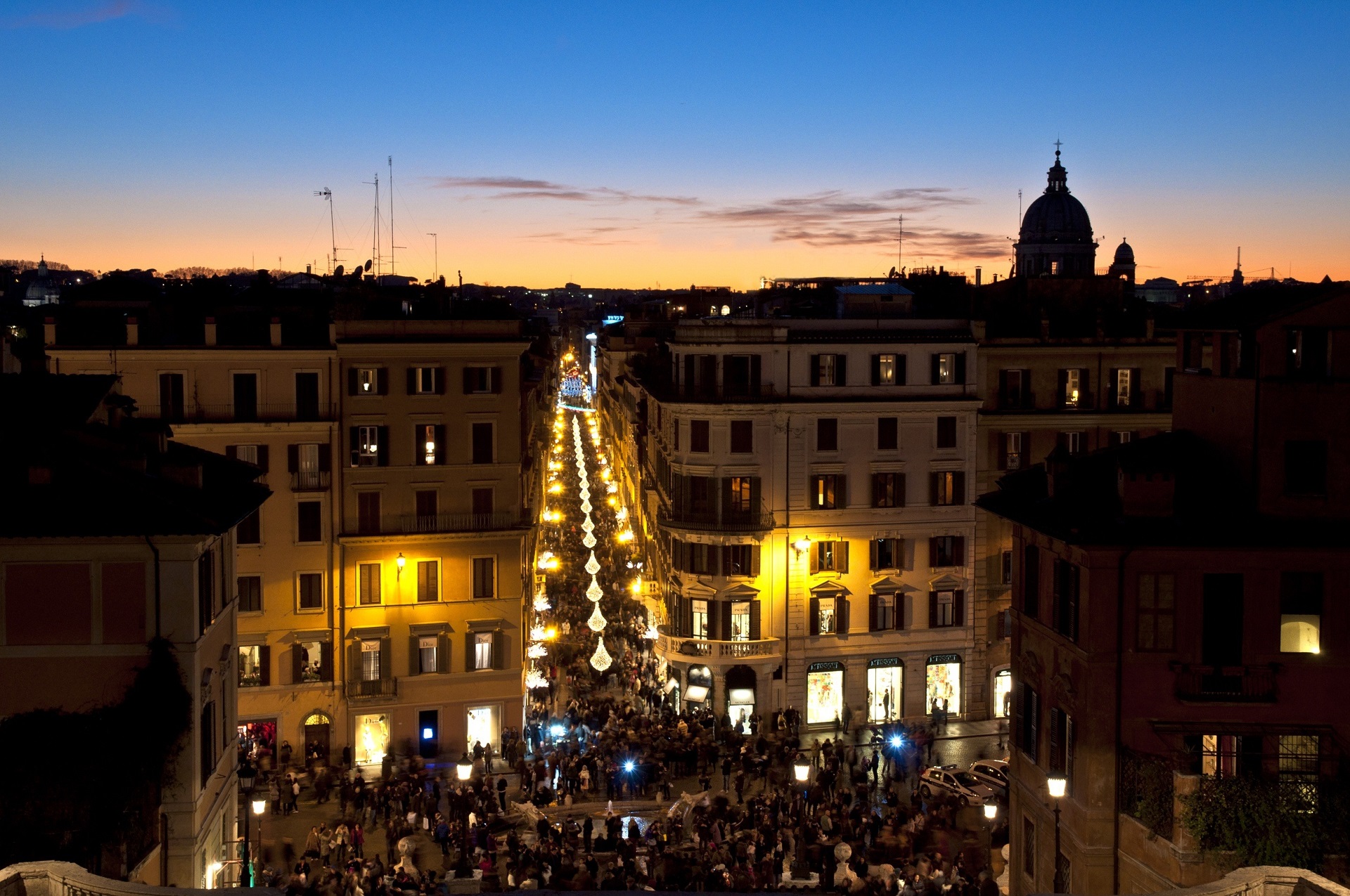 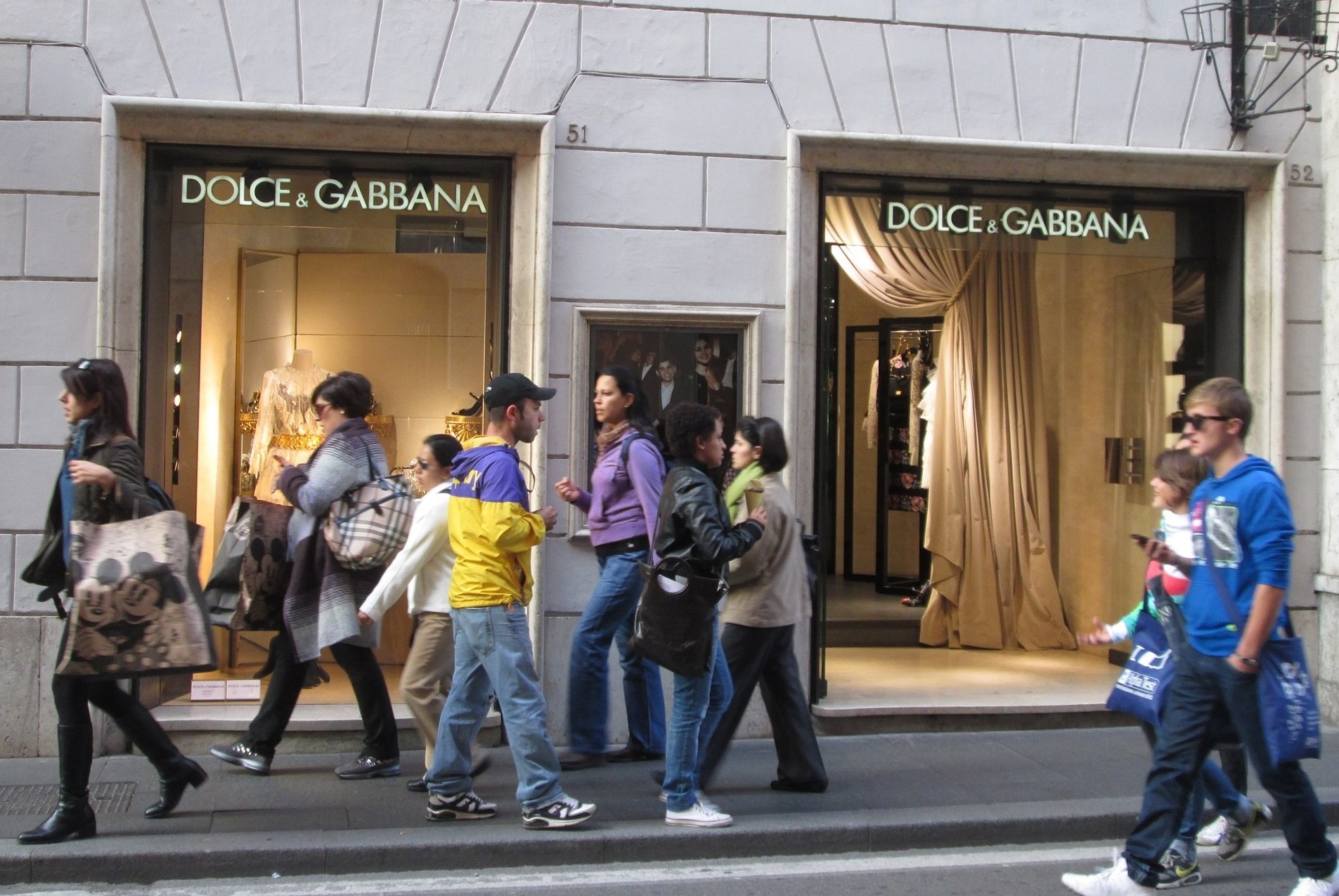 Via dei Condotti is one of the most elegant and fine streets in Europe, and it’s well known for its high fashion shops, a very pilgrimage goal for made in Italy and more. Versace, Cavalli, Armani, D&G, Gucci, Bulgari, Cartier, Luis Vuitton, among the brands…. If you cannot resist to temptations related to high fashion this is THE STREET.

We suggest you also the Antico Caffè Greco, at n.86. Open since 1760, it is the most ancient Café in Rome, and the second oldest in Italy (the very first one is the Florian in Venice). The walls and the spaces are full of more than 300 historic works and relics, that turn it into a great gallery and tell us about a deep story of genius, literates, and famous characters who used to visit it.

Via Condotti takes from  da Via del Corso to Piazza di Spagna, so if you’re not interested in drying your pocket and bank account to go for shopping, you may easily find your shopping way moving there, and at the end of the street you will feel the magic of Piazza di Spagna and its stairs. There always are happy people, great shops, scenographic mannequins, every day of the year, you are very welcome to enjoy all of this anytime! 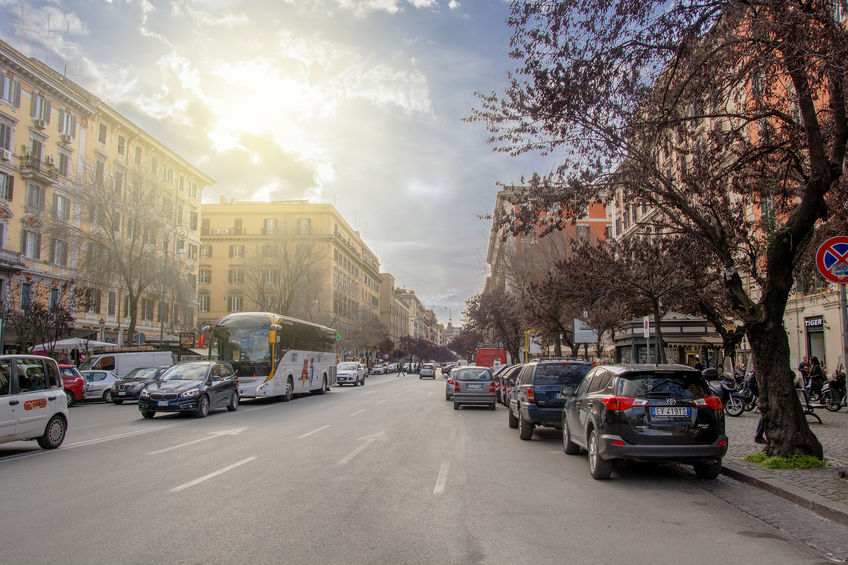 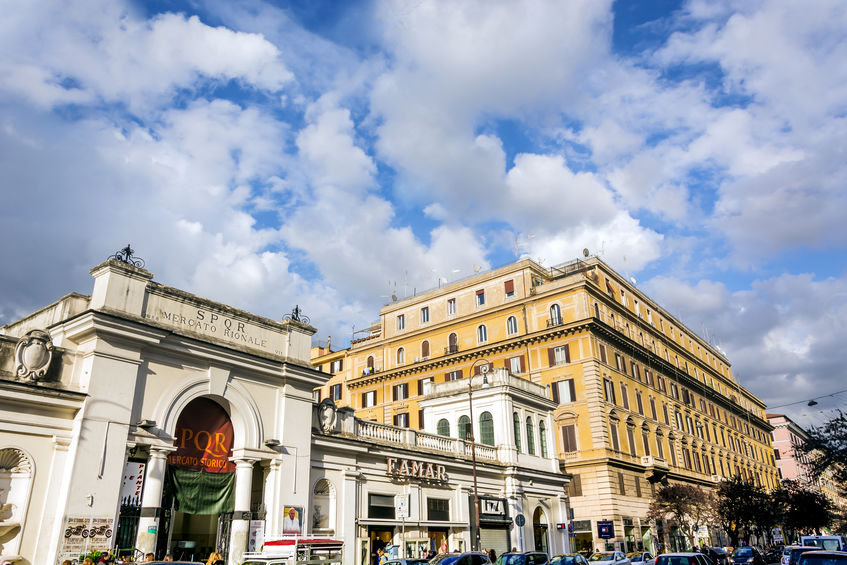 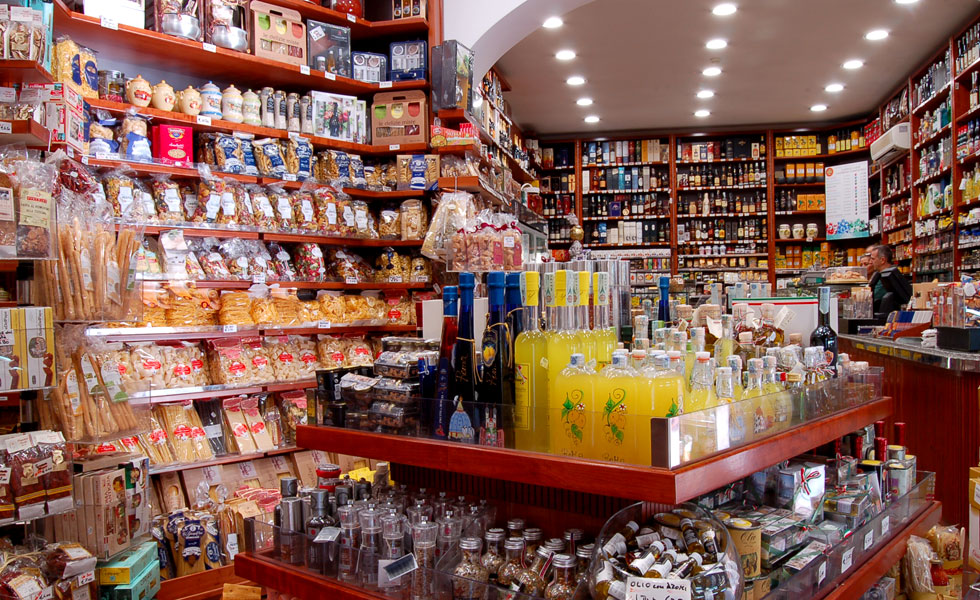 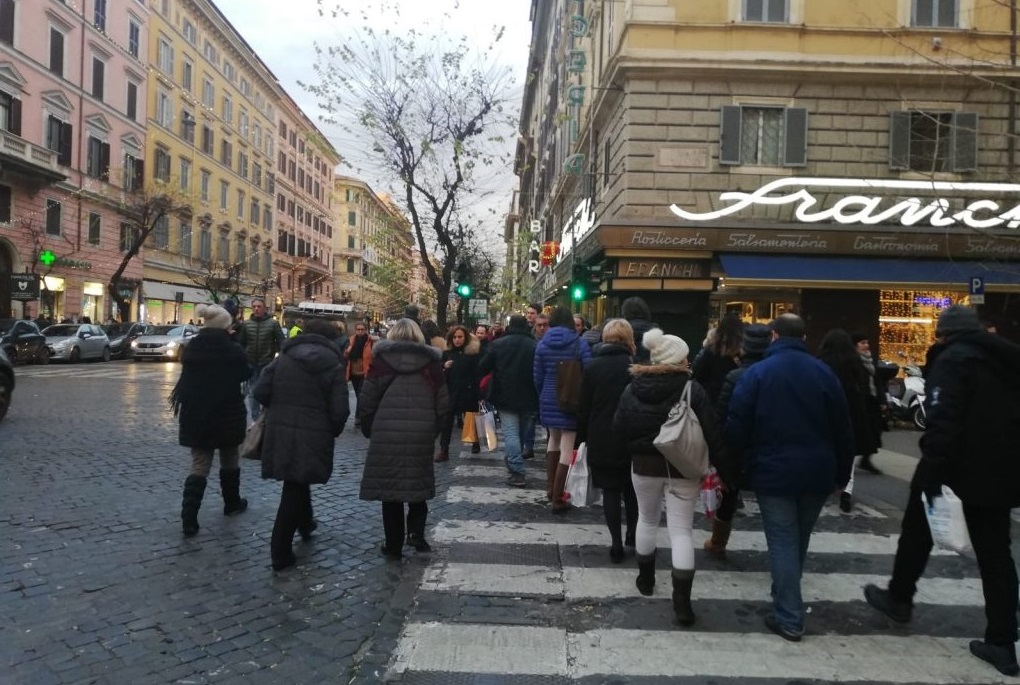 Via Cola di Rienzo, in Prati district is few steps from the Vatican, and is an important and crowded shopping street, ready to meet every taste and need. For someone it is the “new” Via del Corso, because some big fashion brands chose it to place their shops, but also it’s known for its trendy, casual and informal style and for its more accessible brands.

It’s a great street where you can find good grocery shopping, have a tasty breakfast, or to get everyday stuff.  Walking down this street you may find furniture, household items, accessories, books, perfume shops and much more.

Food and delicatessen are available too: we suggest the wonderful Castroni, where you can buy and eat delicious pieces of fine Italian deli. 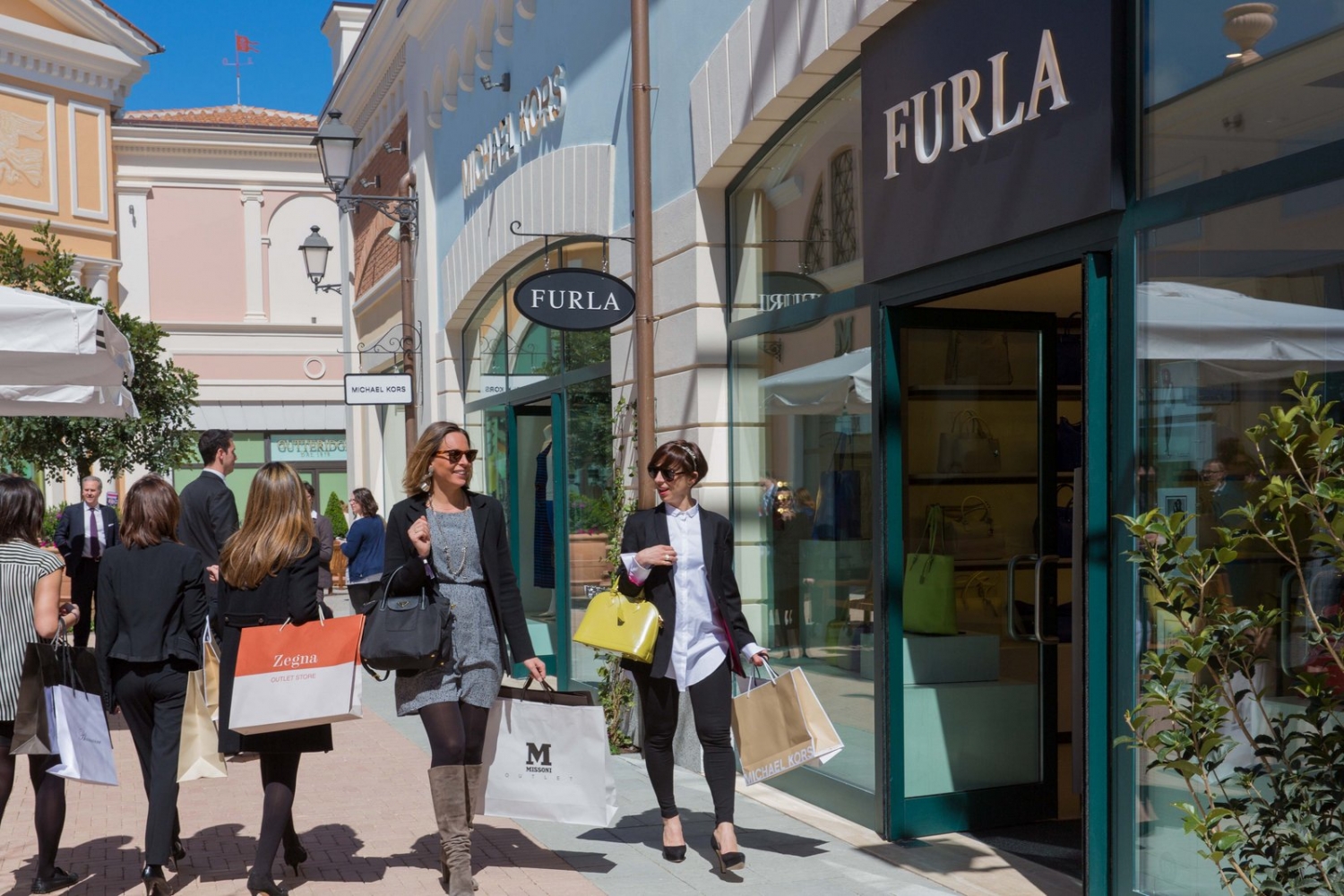 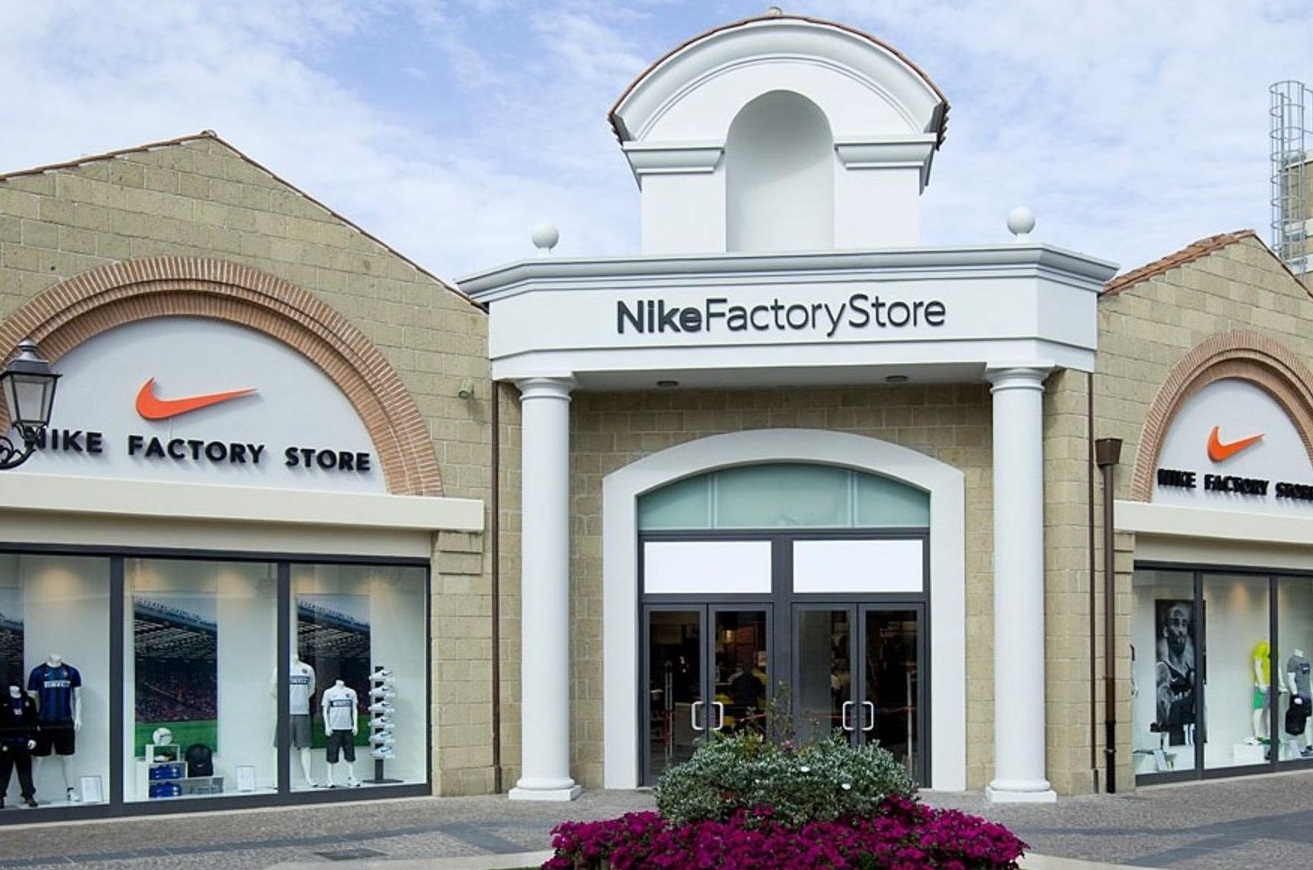 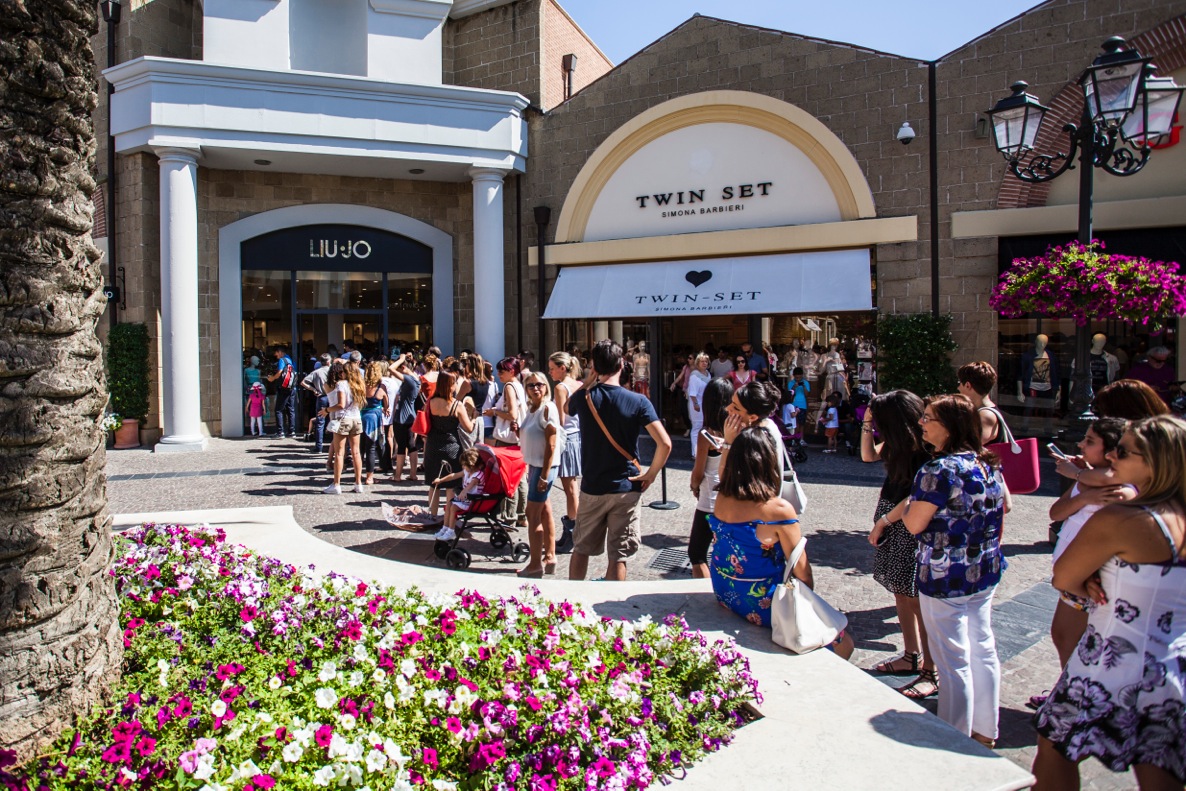 How to reach Castel Romano Outlet from Roman Nights: A bus Transfer to the Outlet is available every day from Termini Train Station, (from Via Marsala 71, 5 mins waking from Roman Nights). The two ways tickets costs 15€ (free access for children up to 10). Click here to see the departure time shift.

McArthurGlen Castel Romano Designer Outlet offers a unique shopping experience. It’s 30 mins distant from Rome, and offers more than 200 firms among the most important fashion brands for shoes, accessories (bags, glasses, belts, etc),  perfume shops, household items, with a discount between 30% and 70% on original prices. A lot of bars, restaurants, and events will let you live a beautiful shopping day. 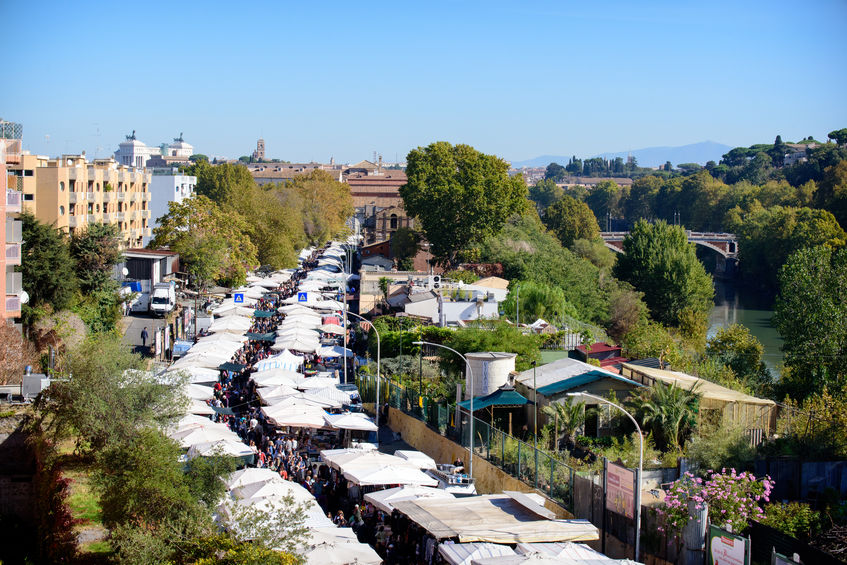 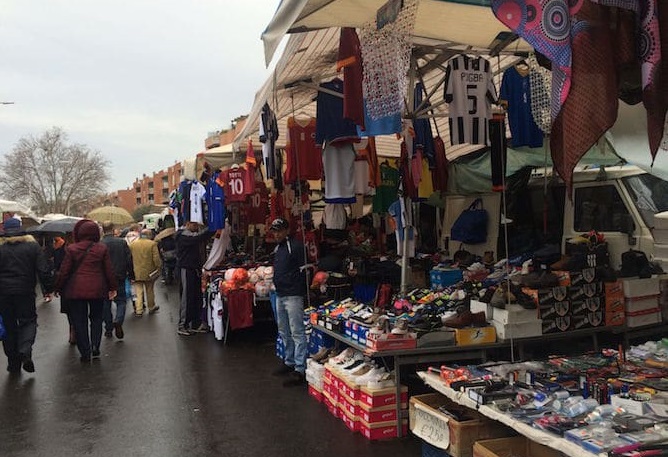 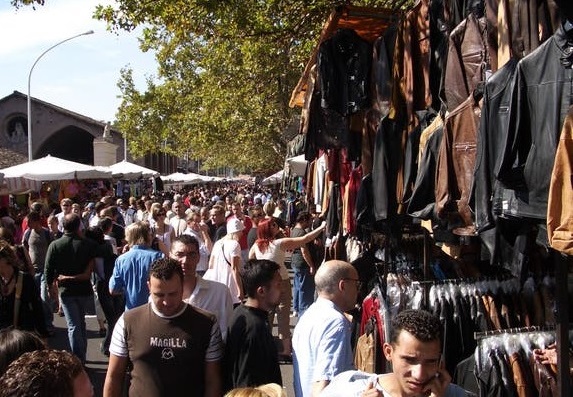 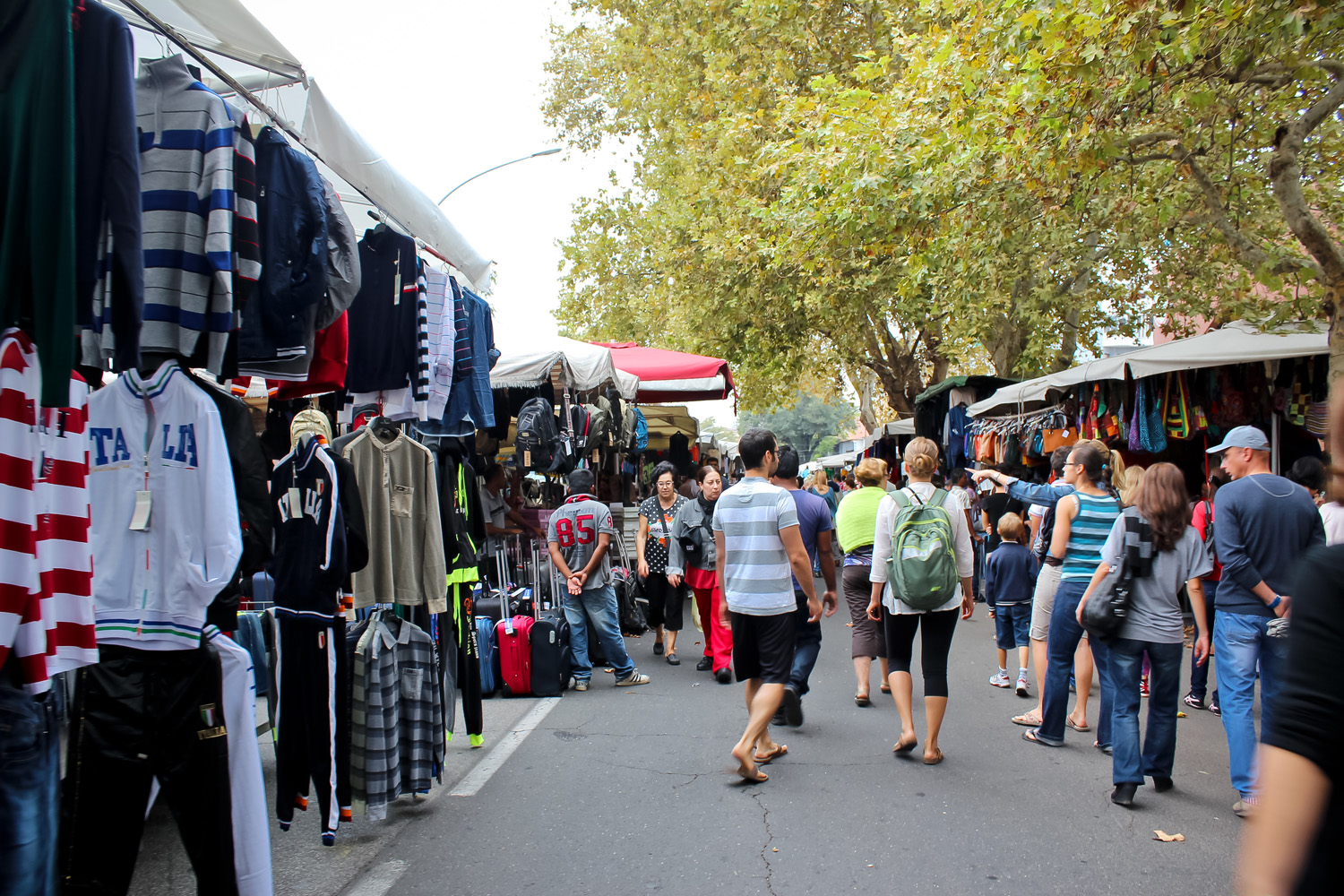 How to reach  Porta Portese from Roman Nights: from Via Nazionale take bus “H” and take off in Viale Trastevere, at “Trastevere/Min. Pubblica Istruzione” stop.  Or, from Via Nazionale take the bus “170” and take off at “Emporio” stop. Both ways you’ll get Porta Portese Market in 5 mins walking.You may also take the tube line B from Termini station (5 mins walking from Roman Nights), to Laurentina, and take off at “Circo Massimo”, then walk 1,5 km ca.

Porta Portese, started around 1945, it’s THE MARKET in Rome.

It is one of the most famous markets around Italy and Europe and it’s known because you may find the most unthinkable items in there.  Like every flea market, this one offers any kind of frippery, books, antiques, toys, discs, make up and old postcards. In addition, Indian silver, leather clothes, and branded vintage items, everything with very good prices. It is not a food market but there are some stalls offering roasted nuts, donuts, and typical delicatessen. It really is a joy walking and touching everything. If you are good at it, you may also make deals and negotiate your personal price for the items you like, enjoying chats and very nice people.

The market starts at 6am and closes at 2pm every Sunday.

It surely is one of the most colourful and picturesque places where you can find the typical old roman climate. 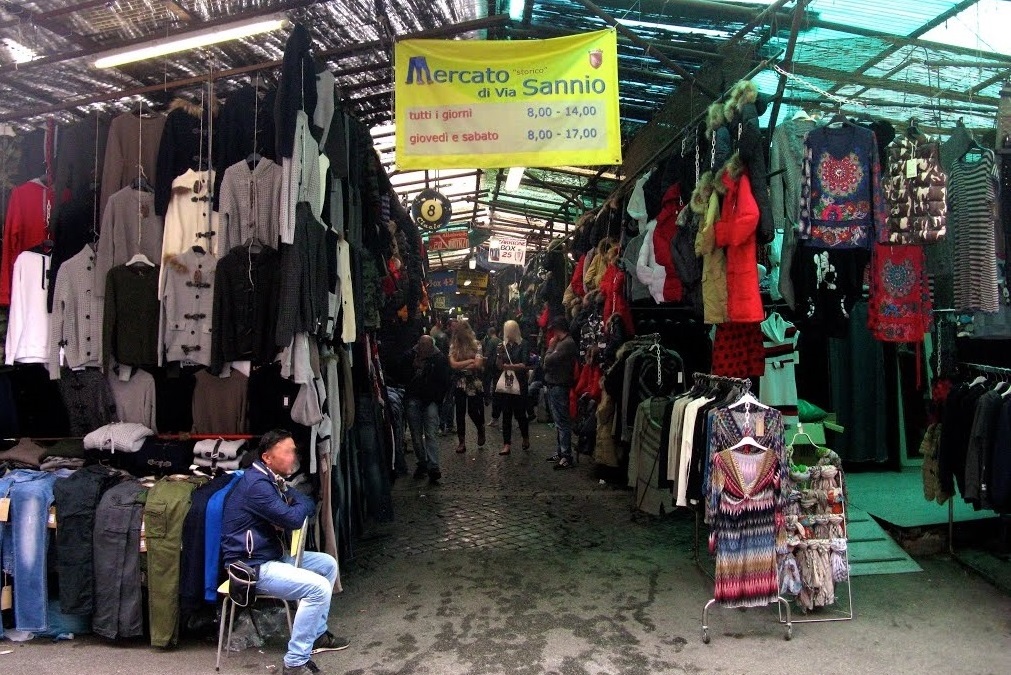 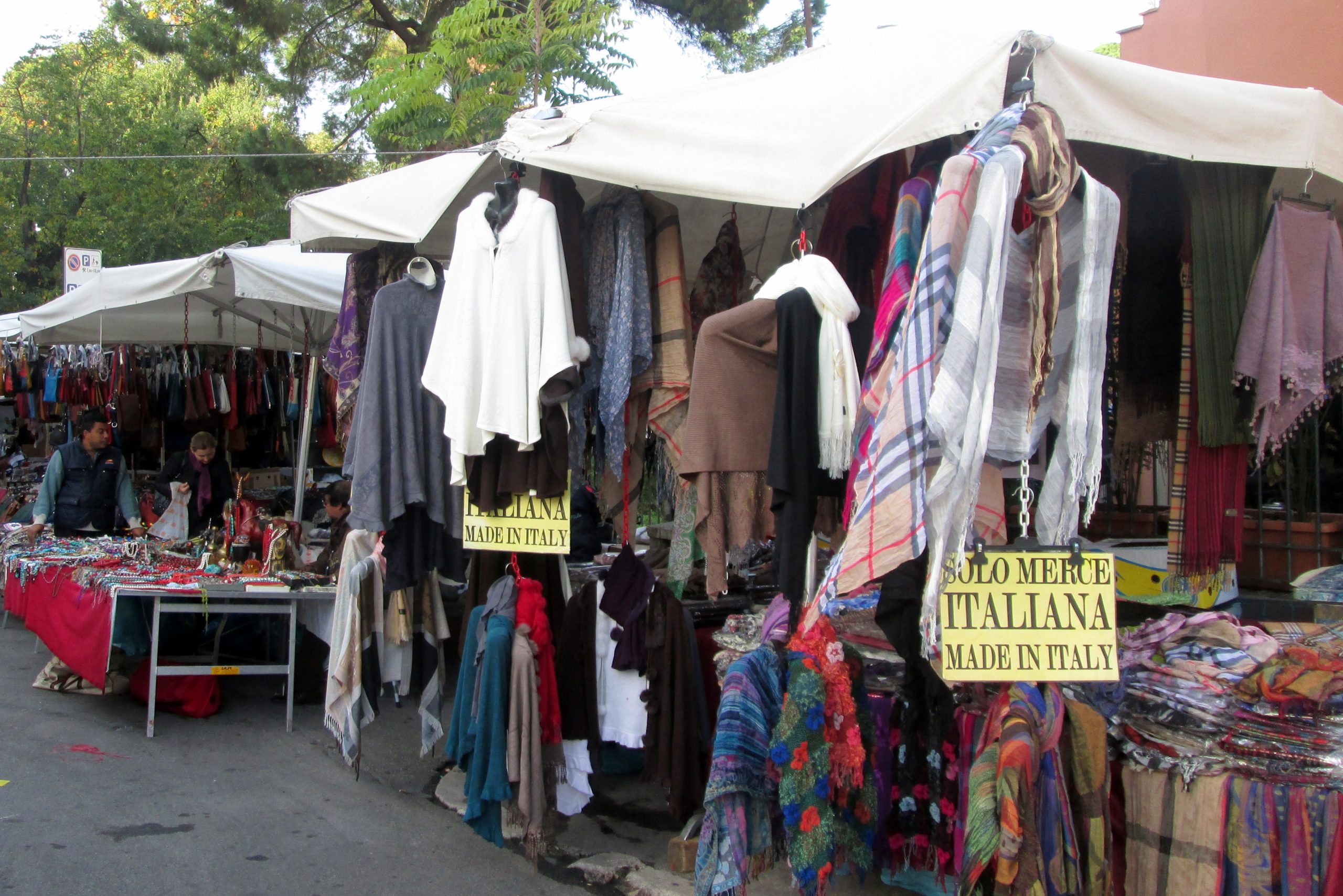 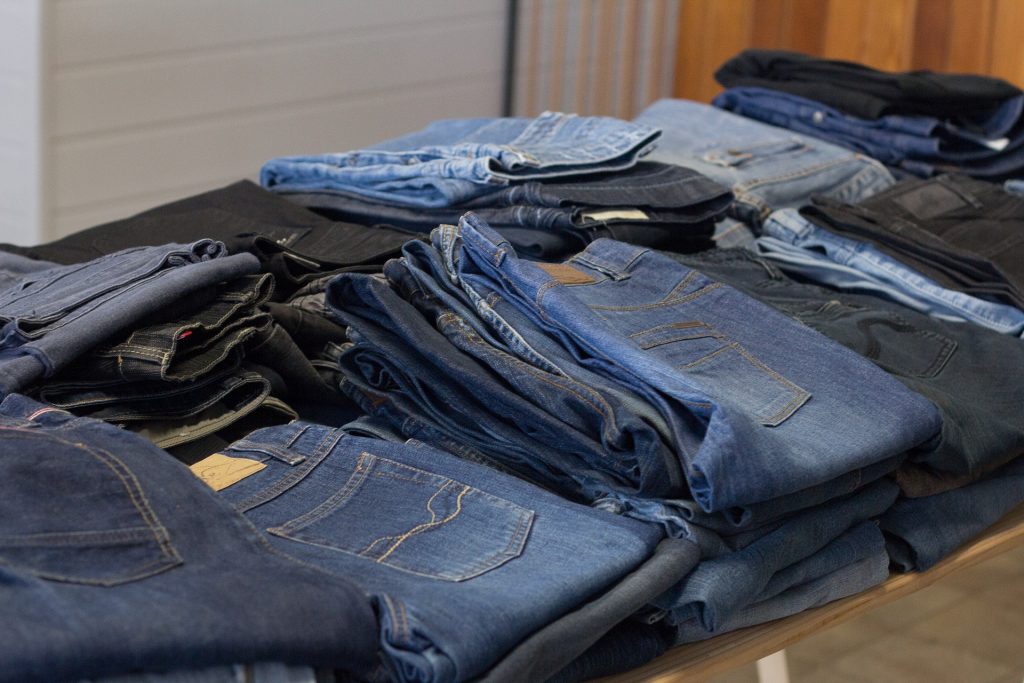 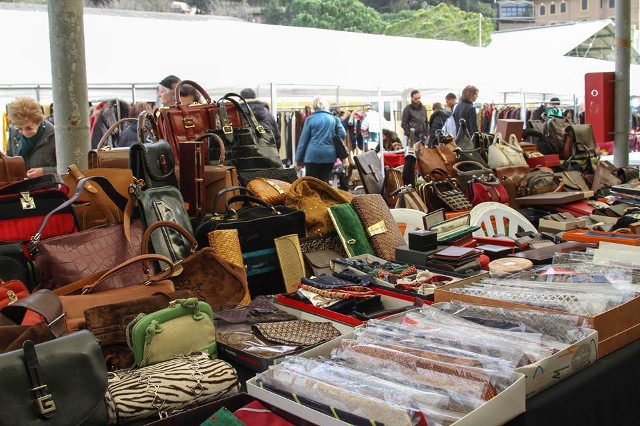 It’s a big, historic open air market that takes place from Monday to Saturday, from  7.30am to 2pm, in Rome in San Giovanni district, the Capital headquarter.  This market offers long lines of stalls, who sell, with great prices, clothes, shoes, accessories, belts and watches. You may also find militaries and items for camping or fishing. If you love a very funny chaos, here your patience will help you to find branded clothes, fake brands, new clothes and vintage ones. All mixed together. It will be like a fusion fashion style addicting.

You will find yourself in a De Sica sort of movie, where everyone tries to catch your attention in order to make you buy something!

Negotiating about the price here is mandatory; this is another aspect that is typical of Roman people. 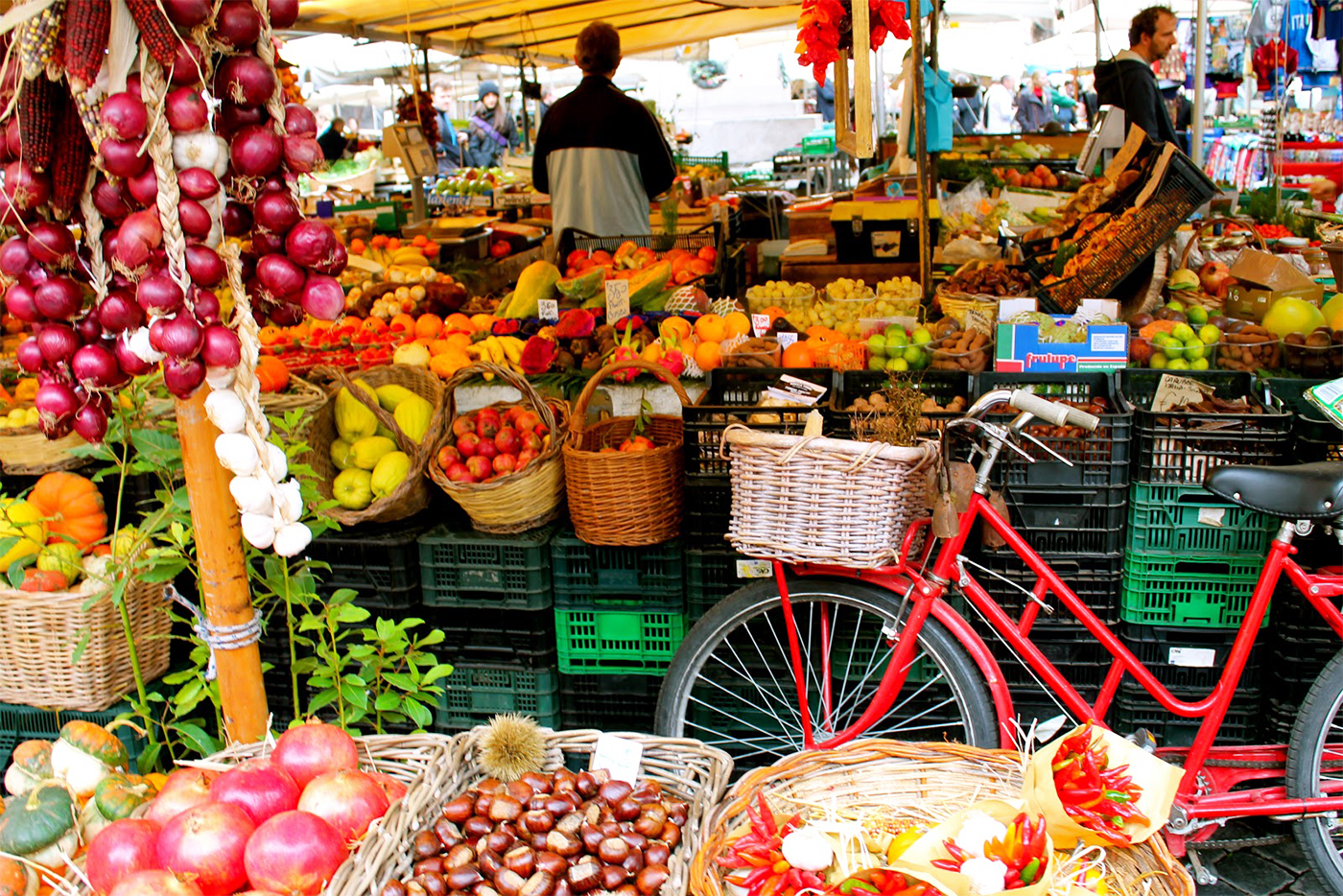 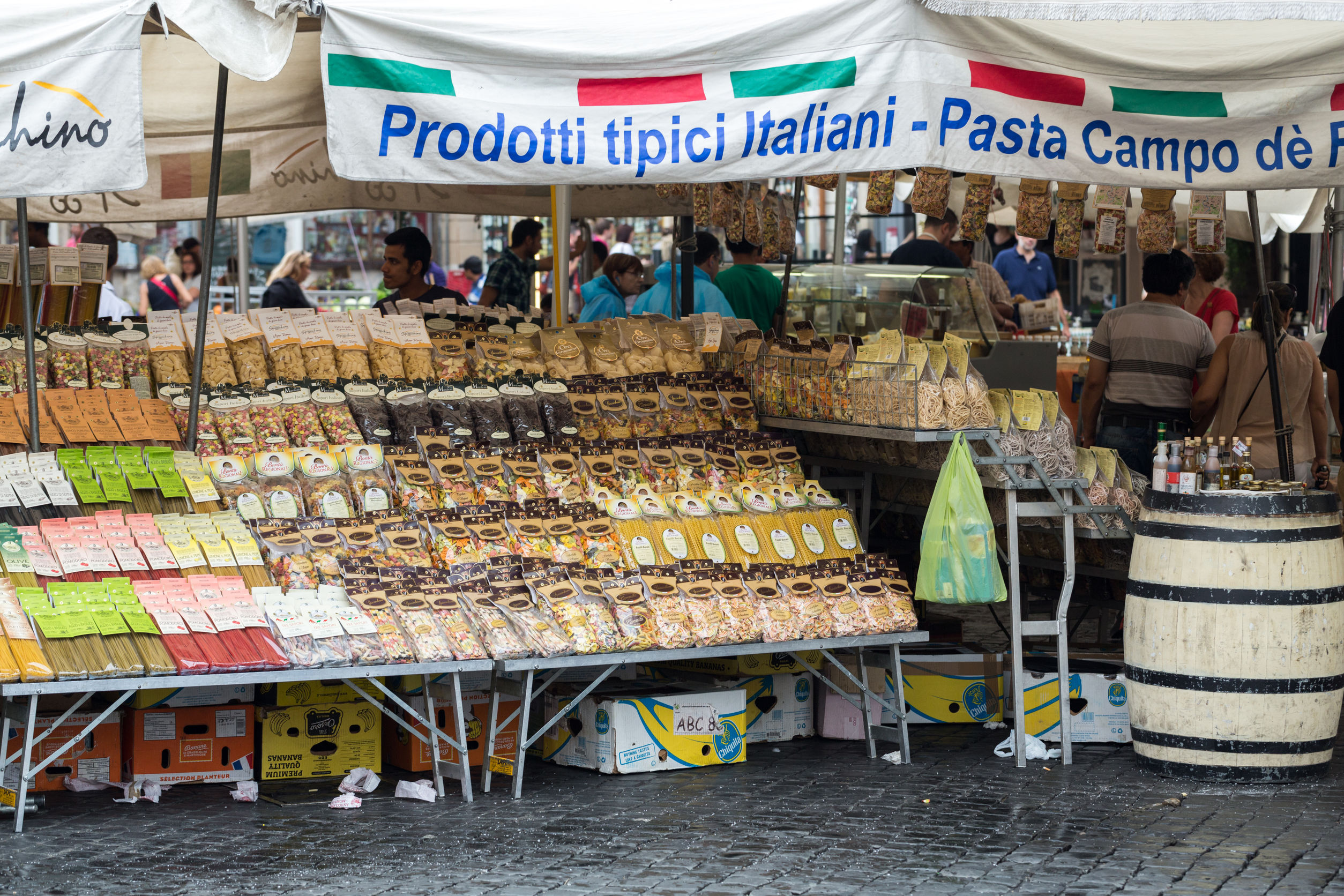 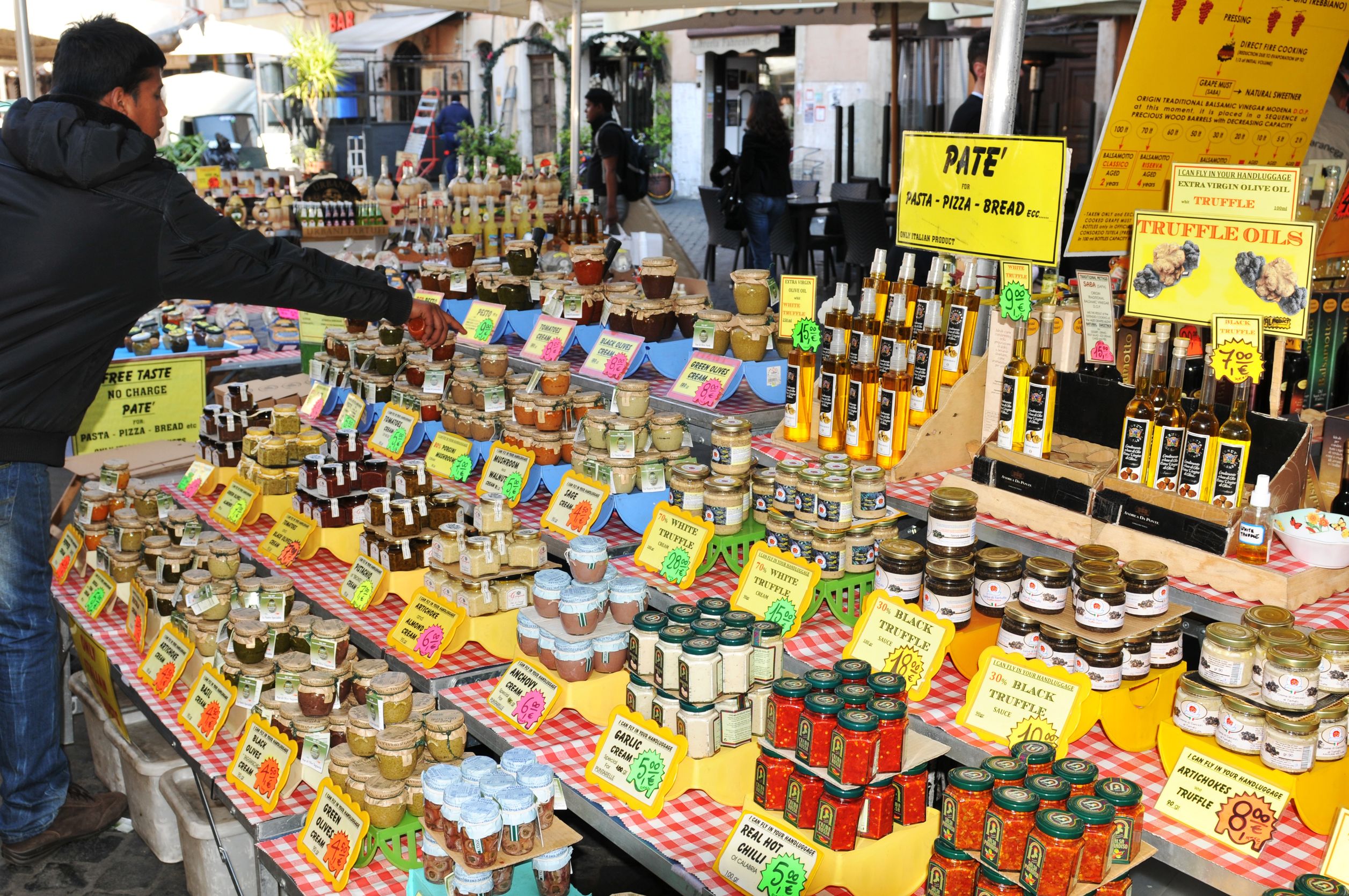 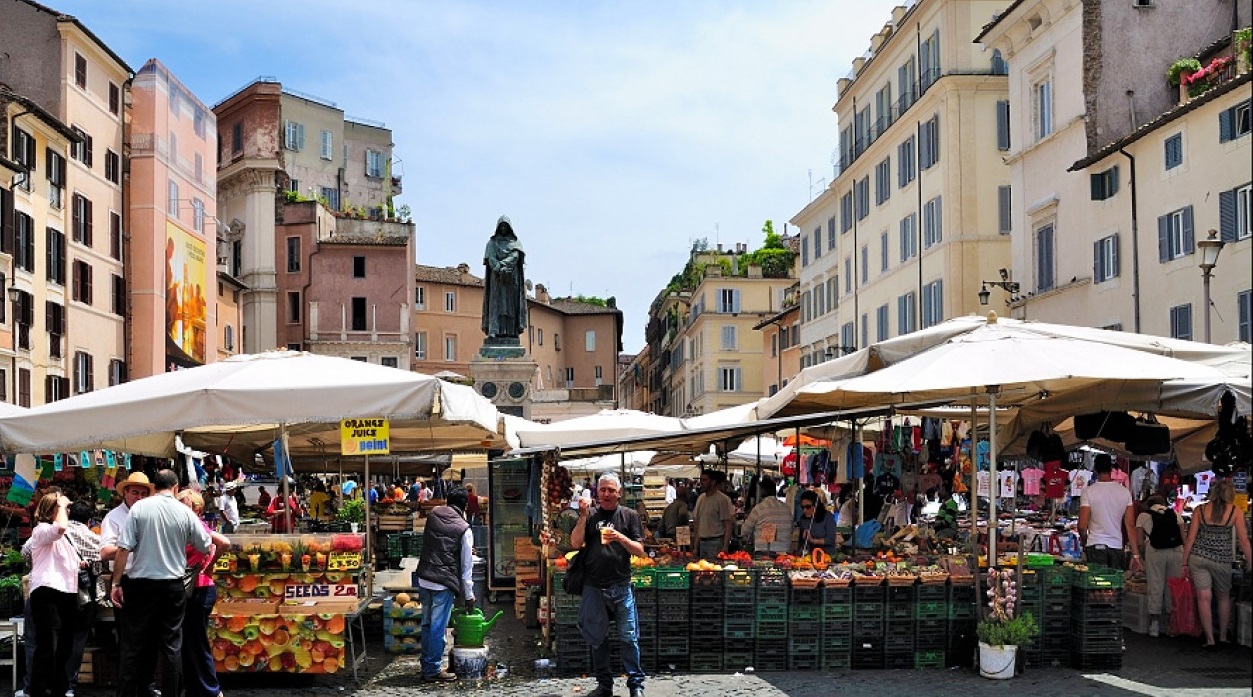 The market takes place in the square, 1 min walking from Piazza Navona and it’s available from Monday to Saturday from 7AM to 2PM. It’s one of the oldest market in Rome for sure, maybe the oldest of all, since in 1869 it was already on. At the beginning of its story Campo de’ Fiori Market was the place mostly for fruit and vegetables, then it added stalls selling meat, fish, cheese and cold cuts.

Today the market is quite different, divided into two realities belonging to two different souls of the city: Romans by one side, looking for everyday grocery shopping, and tourists by the other one, looking for a pic, a postcard, calling for the romantic image of our City.  Therefore, in the very middle of the square are stalls with fruit vegetables, cheese, cold cuts and fish, and all around people sell spices, and typical roman version of pre-cooked dishes.

Times goes on, but something stays, like Signora Franca, for example: 80 years old and still one of the best sellers at the market, offering fresh fruit and vegetables. Alternatively, Mustafà, truly adopted by Rome, who became a famous youtuber thanks to his weird and funny slang, while shows the magic behind his veggie cutter.